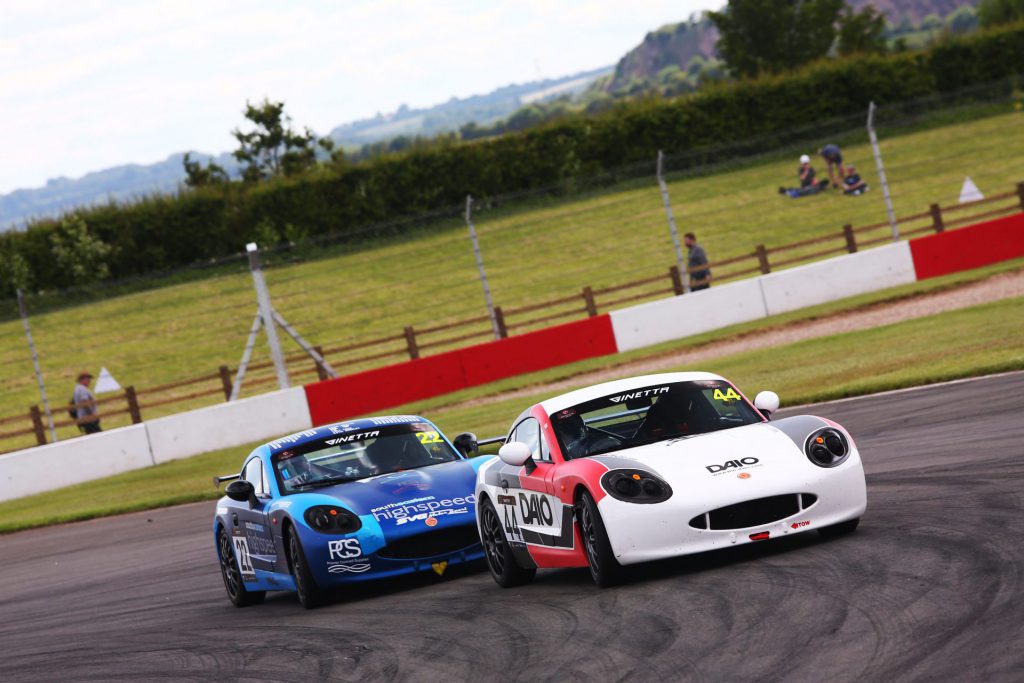 We arrived at Donington on the Thursday prior to the race weekend, and at long last were able to get some testing in! As my first time at the circuit, it was great to be able to learn the circuit on Thursday and begin to build on my pace on Friday.

That gave me a good start to qualifying on Saturday morning, and again I topped the timing sheets in the first couple of laps. On my final lap, I glanced down at my Delta time, and it told me I was 0.65 faster than my previous fastest lap. Unfortunately I then missed a gear out of the final corner, and my lap was ruined! This left me 5thon the grid – a position I knew I could race from, but frustrating that I was on a pole lap before my mistake!

In Race One I was therefore determined to make up for my mistake. I got a good start, and passed one car into the first corner. I kept the momentum and passed Sansom into the Old Hairpin, and Cornick into Coppice, and was up to 2ndat the end of lap one, catching Trice for the lead.

On lap 2 I made a mistake which cost me a position, and dropped down to third behind Mike Kidson. I managed keep pace with him though, and when he passed Toby for the lead, I was right on Toby’s tail in a battle for second. I made a pass on the Grand Prix loop, and took the position, but missed a gear (AGAIN) on the exit, and dropped back behind. The next lap, I had another chance to pass but locked up and ran wide. At that point I decided to settle for third position, and secured my first podium – what a feeling! Having got a taste I was keen to go one (or two) better in race two!

I started Race Two in 3rd, again based on my previous finishing position. This time I got a poor start, dropping down a place at turn one but regaining it down the hill through the Old Hairpin. I set about chasing down Toby to revive our battle from earlier, but was being caught from behind by Cornick. As he made the pass I was pushed out wide, losing momentum and allowing Ormerod to follow Craig through, as I dropped to fifth. I kept pace with Ormerod and regained 4thwhen he made a mistake and spun, but couldn’t make more progress and that’s where I finished.

The weekend was crowned by the removal of the novice cross from the back of my car – with 6 finishes from 6 races, I’m now eligible to get rid of my novice status and upgrade my license!

We now have a long break until the beginning of August, when we travel to Brands Hatch for the final round of the year.