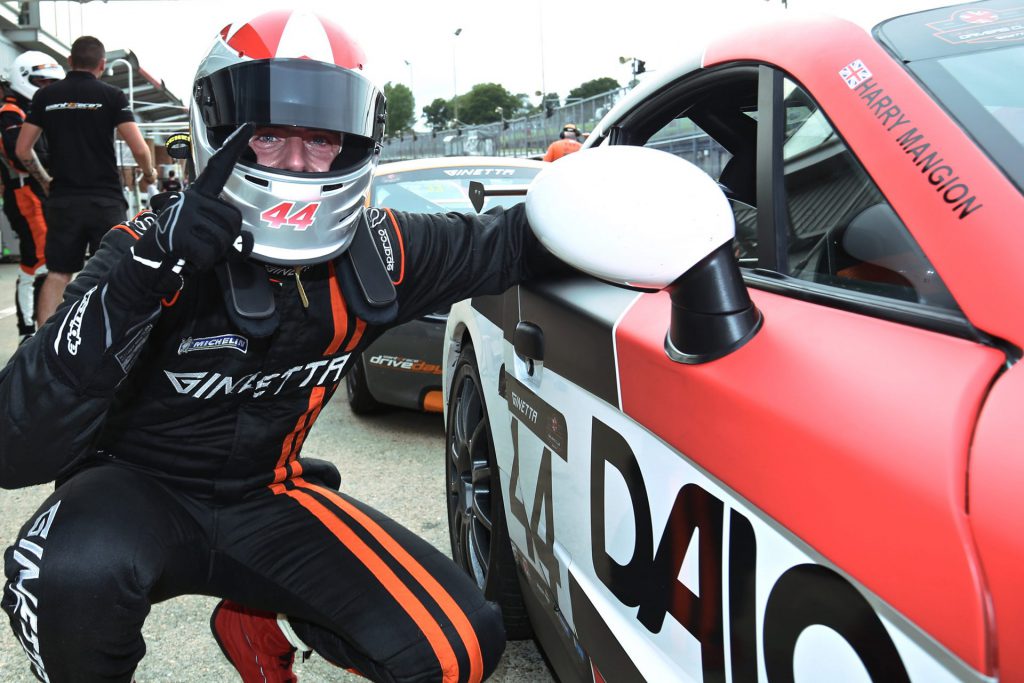 After a long break, I was excited to get back in the car – but it was bittersweet as this weekend marked the last of the Championship! Some productive testing on Thursday and Friday, learning the circuit for the first time, set me up nicely for the weekend.

I was therefore confident going in to qualifying on Saturday morning, and managed to get out first so I had a clear track ahead. Again I set the pace early in the session, but was conscious that I had Chris Threadgill close behind, and knowing he would be a close competitor, I didn’t want him to have the benefit of my tow! So I let him past, and tried to take that benefit myself. However, with Chris’s car dropping oil, my windscreen was being covered, and the smoke putting me off in the very fast GP section. Nonetheless, I pushed on and traded fastest laps with Chris, until Toby Trice pipped me to pole. But my best lap of 1:50.5 was good enough for P2 and a front row start!

I knew my start was more important than ever in Race One, and I got off the line well. However the challenges of Brands Hatch’s inclined start meant I got a lot of wheelspin and a big slide, so had to follow Toby into turn one in second. Towards the end of the lap, I got a run on him into Stirling’s, and while he went defensive, I went around the outside and took the lead. Chris Threadgill then made a pass on me to drop me back down to P2, before a Safety Car neutralised the race to clear an accident.

On the restart, I was under pressure from Mike Kidson, who passed me into Hawthorn, and Toby managed to follow him through as I lost momentum. This left me down in fourth where I would stay for the rest of the race.

A frustrating finish from the front row, especially as the top 4 were much quicker than the rest of the field, and I just wasn’t able to capitalise on my pace.

For Race Two I was determined to finish the season on a high, setting my sights on the three cars in front from 4thon the grid. This time I got a poor start, and Mark Lee passed me into turn one, but I returned the favour as I cut back and went down the inside into Druids. I wasted no time chasing the cars in front, and followed Mike through as he past Toby in Graham Hill bend – up to P3.

For the next lap I put the pressure on Mike and forced him to defend into Paddock Hill bend, to get the run up the hill, and made the pass down the inside into Druids. P2, but with a gap of 1.7 seconds to Chris Threadgill in the lead, so I set about closing the gap. I lapped consistently faster than Chris, chipping away at the gap over 4 laps, before I got alongside into Hawthorn. I couldn’t make the pass stick but continued to apply the pressure, and he ran wide on to the grass, given me a run into Clearways. I went round the outside to take the lead, and focused on trying to build a gap and break the tow.

I set the fastest lap of the race in an attempt to break away, and was consistently putting in fast lap times, hoping to see the chequered flag. Then I made my only real mistake of the race at Stirling’s, giving Chris a great run into Clearways and forcing me to defend. As he got ahead around the outside, I knew it could be the last lap, and therefore had to make sure I got on the power first. As we rounded the start/finish ‘straight’ I saw the flag, and it was a drag race to the line. I took the win by 0.047 seconds, and it was a brilliant feeling to finally get that first win, especially after such a dramatic finish!

Overall it’s been a good season, finishing all 8 races in the top 7 and bagging a couple of trophies along the way. Unforunately it looks like I missed out on P3 in the Championship by just 5 points, but with very little testing prior to the season, I’m happy with my pace towards the end of the season and know I can compete right at the front.

The GRDC has been a fantastic experience and Ginetta have been brilliant in helping me through my first season of racing – I’m now looking forward to moving up the Ginetta ladder in the future!

A big thanks once again to The DAIO for the continuing support, and to Elite Motorsport for all the help through the weekend.