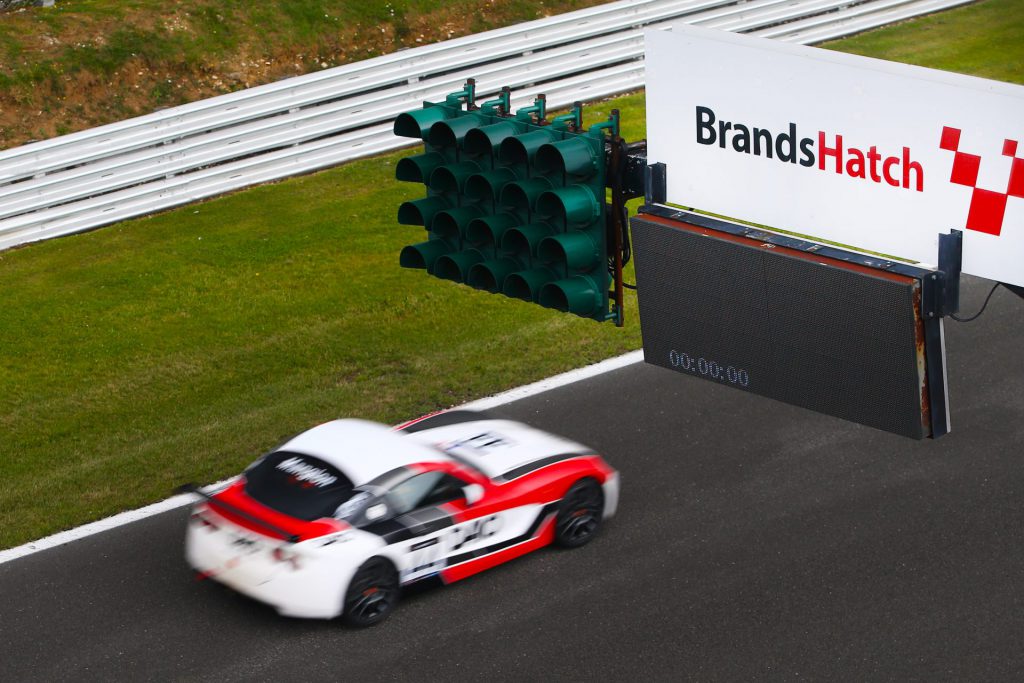 So, my first season in motorsport is complete, and what a fantastic year it’s been!

I signed up to the 2019 Ginetta GRDC relatively late, and due to work commitments, only drove the car for the first time 5 days before the opening round of the season. As such, my expectations for the year were modest, and my main goal was simply to improve my driving over the course of the season…although I naturally had slightly optimistic hopes of the podium.

First up was Snetterton, and, true to form, the British weather threw a spanner in the works. Following a dry test day on the Monday before the race, I was straight into a damp, greasy qualifying session on Saturday morning. I think we all struggled, with a number of spinners making it difficult to get a clear lap – so I was pleased to start from 6thon the grid from 14 runners!

The two races later in the day were both dry, and I was consistently improving my times, ending with 7thin race one and 6thin race two.

Next up was Silverstone GP – the only circuit on the calendar that I’d driven before, and one I was massively looking forward to. If anything, the circuit is probably too big for the Ginetta G40 – being so fast and wide. That said, the Friday test in the torrential rain was still pretty scary for a novice sharing the circuit with around 60 other cars!

Saturday morning was again damp, with the track drying throughout the qualifying session. For this race, we shared the grid with the G40 Cup runners, and with some of those on the wrong tyre for the conditions, I found myself coming across traffic fairly often and struggling again to get a clean lap. Nonetheless, I was running right towards the front for the majority of the session. That was until I suddenly had no power on the exit of Brooklands…

I coasted into the pit lane and that was the end of my session. With the track drying while I was sat in the pits, my time was only good enough for 9thon the grid for both races.

For the races, therefore, I knew a good start was crucial. So to go from 9thto 3rdin the first half a lap in race one was exactly what I had hoped for! I had some great battles throughout the race, and crossed the line in 4th, just off the podium – more of the same in race two, hopefully!

I couldn’t quite replicate my start in the second race on Sunday afternoon, and only made up a couple of places on lap one. A disjointed race, with a couple of mistakes and a prolonged safety car period, I couldn’t make any progress, and ended the race in P7 following a long battle with Chris White.

Donington came around just two weeks later, to mark the start of the second half of the season. For this race, we joined up with Elite Motorsport – a front-running team across the Ginetta series – and managed to get two days of testing in just before the race. As a result, a P5 in qualifying gave me my best grid slot to date, though it should have been so much more on my final lap!

In race one I continued my fast-starting form, ending the first lap in 2nd. I dropped behind Mike Kidson to third, but after he then passed Toby Trice for the lead, I gradually caught Toby and began to fight to regain 2ndposition. After a couple of laps of battling, I was unable to make the move stick, so consolidated my position and made sure we didn’t allow the chasing pack to catch us. When I crossed the line, I was over the moon – my first ever podium, in my fifth ever race, and having made such a dramatic improvement in just over a month from the beginning of the season.

This meant I started race two from third. Again I made a reasonable start, but ultimately didn’t have the pace to stick with the leaders and, after a fairly lonely race, finished 4th. A bit disappointing – which just shows how far I’d come at that point!

It was then a long wait until Brands Hatch and the final round of the season. Another circuit I’d never driven before, and the Thursday test was a frustrating day as I struggled to get to grips with the track. I knew I needed to improve in qualifying, and that’s exactly what I did! Finding over 2 seconds on my best time from Thursday, I took P2 on the grid for my first front row start.

This time, I got a terrible start in the first race. The undulation of Brands Hatch means the start is on a slope, and that meant I got a load of wheelspin and had to lift off. Despite that, I pulled myself together and took the lead before the end of the first lap. I dropped down to second before a safety car period, and then unfortunately lost a couple of positions just after the restart, crossing the line 4th(again).

This gave me added determination going into the last race of the season. As did losing a place on the start, putting me 5thgoing in to turn one. From there I made my way forwards one-by-one, and took only a lap to get second, but with Chris Threadgill 1.7 seconds clear in the lead. After just 4 laps, I had caught and passed him, and managed to retain my lead for the rest of the race (despite a mistake in the last corner of the last lap!).

Seeing the chequered flag for my first win was a brilliant feeling – to come from Snetterton less than 3 months earlier, with next to no track experience, to taking my first win in a fiercely competitive series was well beyond what I could’ve imagined.

The season overall has been a fantastic experience. Ginetta have been a massive help as I took my first steps into racing, and I couldn’t have wished for it to go any better. Without the opportunity to test prior to the start of the season, to get a win in the final race was the dream! I have progressed massively with the experience gained through the year, and have loved the competition in the series. But despite the close racing, the whole grid have been hugely supportive of one another. I can’t wait to (hopefully) carry on up the Ginetta ladder in 2020!

If you are interested in a partnership with Harry Mangion Racing for the 2020 season, please get in touch below.